In the blink of an eye, the seventh annual TCM Classic Film Festival came and went. This year’s theme was “Moving Pictures”—that is, films that emotionally move us. I returned for my second year as a pass-less attendee (broke college student here), but that isn’t enough to fully keep me away from all the excitement. There were a few movies that I was interested in seeing, but I knew I probably had time for just one screening that whole weekend. So, I made the best of it.

Before noon, I drove down to the metro station with my dad (where I also met up with a friend), and we took the underground rail straight into the heart of Hollywood. After checking out the venue and getting a programming guide at the Hollywood Roosevelt, we made sure to get a full lunch before plunging into the festivities. To our delight, we were the first three people in the standby line. For the next 1.5 hours, we chatted with another person in line, received our queue numbers, and took a bathroom break—just to be on the safe side. Once we reclaimed our spots, I was reacquainted with someone I had befriended in line a few months ago at the Egyptian Theatre, and we started chatting about all things classic film.

A festival staff member came up to our line, asking for the first five people to step inside. After purchasing our tickets, we found seats in the middle of the third row. I looked around, noticing there were plenty of seats left, and lots of time to settle in before the program started. Compared to my own experience from last year, it was way more relaxed.

Serge Bromberg (of Lobster Films) was introduced, and he began by talking about his work as a film archivist and historian. He went on to discuss the restorations of Keaton’s short films, showing us visual comparisons. The first clip shown was the last scene from The Haunted House (1921), in which the restored version replaced a foggier counterpart with a wipe. The difference was astounding. My friend and I remarked on the red tint of the devil’s lair, which was a nice touch. Bromberg even played the musical accompaniment on piano (while impressively looking up at the film as he played), and I just remember thinking, “This is everything I want in a career.”

A scene from Good Night, Nurse! (1918) played next, where Roscoe Arbuckle dresses up as a nurse and attempts to flirt with Dr. Buster. My jaw dropped at the clarity in the restored version. You could even see the fine detail in the wallpaper! All around me, the audience just kept roaring with laughter at the pair’s silly antics. I know I will never tire of seeing a larger-than-life (smiling!!!) Buster in such crisp lucidity. Moving onto Day Dreams (1922), Bromberg pulled up the scene where Keaton ends up flying behind a trolley and pulls himself over the railing. He pointed out the four quick jumps in the sharper print, while showing us another version that had all frames intact. During the restoration process, both prints were combined. We saw the rough cut of this (where you could clearly see which frames belonged to which version), paired with the same scene that underwent color grading—which made all the difference. As a bonus, the entire short film was shown afterwards. Now if we could only get those missing scenes to resurface…

I was absolutely gobsmacked to see that My Wife’s Relations (1922) had a never-before-seen alternate ending. From what I can remember, Keaton runs into a bungalow, with Joe Roberts trailing behind him. Then it cuts to an exterior view of a brick building with lots of windows, all of which seemed to have striped awnings. Keaton, from the top-right corner, starts going diagonally across the frame by swinging from one awning to the next (as it rips), landing safely on the ground.

In Coney Island (1917), Bromberg talked about the fade-out in the available version and how that technique wasn’t even invented yet. He then went on to explain that there was an original ending to it, which was ultimately left out due to its controversial nature. Bromberg mentioned something about how film historians and restorers have to make the decision regarding whether to keep a film as it was originally intended to be seen, or to leave out some parts that don’t mesh very well with today’s audiences. The fade-out ending was kept, but the original can be seen in the special features of the upcoming DVD set to be released sometime within the next month or so.

It was now time to move onto the scheduled short film, The Blacksmith (1922). We were all told the story about how someone phoned Bromberg, saying that a reel had been found of this film. Bromberg recalls saying, “What are you talking about? The Blacksmith has already been found.” The man on the other end then said, “Let me start the conversation over. I am the one who found the missing half-hour footage of Metropolis, and I have with me the missing scenes of The Blacksmith.” Bromberg went on explaining that this version (with the rediscovered footage) was the one that was originally shown and released back in the 1920s, not the one we see available today. Instead of showing the gag where Keaton ends up getting grease all over the right side of a white horse, the intended scene showed Keaton hopping into a car and then eventually being chased by Joe Roberts, while also trying to ask for the hand of equestrienne Virginia Fox. It even turned slightly risqué at one point, as Keaton and Roberts stop in front of a window to watch the silhouette of a young woman undressing. I was told later that some of the missing footage had been uploaded to YouTube, but in very poor condition. After looking it up, I couldn’t believe the pristine work on the restoration. It’s some really incredible stuff. For the screening, Bromberg started out by showing the “A” version (the one with the horse gag), and then slightly rewinded back to where the “B” version picked up (which Bromberg didn’t know he owned for ten years), playing the rest of the film from there.

After sitting through all these unexpected sneak peeks of a Keaton treasure trove, I seriously needed a moment. The shock of seeing rediscovered footage (who knows what’s still out there) is way more than I could possibly handle.

Continuing on with the program’s highlight, Laurel & Hardy’s The Battle of the Century (1927) was shown. To my knowledge, the complete version of the film had not been seen since 1936, because the second reel (containing the pie fight) had been considered lost for decades until it was rediscovered last year. It was my first time (consciously, at least) seeing a Laurel and Hardy film, which I thoroughly enjoyed. Right after the screening, my dad (who is a huge fan of them) recalled watching their films while growing up in Poland at a school for the deaf. He said the duo were very popular there at the time (mid-twentieth century), as well as the other silent clowns. I think this is also the first time I got to see a screening with my dad—ever. With our shared interest in silent comedies, it’s opportunities like these that allow us to enjoy the movie-going experience on a much more equal level. Sometimes the intertitles went by too fast for anyone to read, but the action still provides a universal way of understanding the story without much of their use. 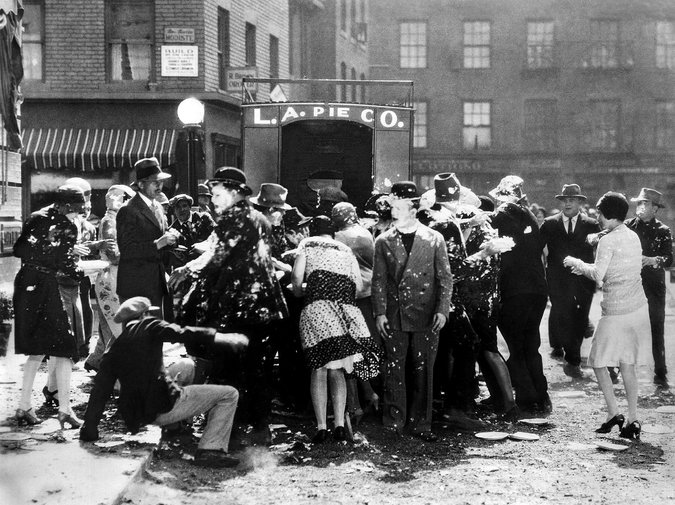 Following the film, Bromberg showed two minutes of an eight-minute short film called The Whole Truth (1923) starring Stan Laurel. The program also called for Charlie Chaplin’s The Bank (1915), but it wasn’t shown. To my understanding, however, it was screened at Club TCM (in the Hollywood Roosevelt) the following afternoon for a special presentation. I am already looking forward to seeing what 2017 holds for the TCM Classic Film Festival, but for now, it’s onto the next!