For my “History of American Cinema” class, I wrote a (brief) research paper regarding the impact of the coming of sound on the American film industry.

It was in 1927 when American audiences first heard the beginnings of a “talking movie” in The Jazz Singer. While Al Jolson audibly says, “You ain’t heard nothin’ yet!” to the audience in the film, it was also true for actual movie-going audiences. When movies began to make way for sound, a paradigm shift occurred. Silent films that gradually started to incorporate synchronized sound and dialogue (like The Jazz Singer) marked the beginning of a major change that was rapidly approaching. Once the transition to sound became a normal part of production and exhibition, there was no turning back: sound had taken over.

Since the dawn of cinema, films were projected without sound. Known as silent films, a story had to be told in a unique way. Intertitles were used for narration and choice dialogue—only when necessary. Otherwise, silent pictures relied heavily on the acting and visual aspects. Though they are often poked fun at by much more modern and contemporary audiences for being too over-the-top in dramatics, silent films have been very effective in the telling of a narrative despite the absence of sound. However, they were not truly silent. When a film was projected in front of a live audience, a great number of “theaters employed a single musician, usually a pianist, to accompany films and song illustrators. Orchestras remained small when they existed at all” (Altman 289). Music, before it was incorporated into film with the invention of talking pictures (or “talkies” for short), proved to be an important function in setting the mood for a story, and provided the audience with a cinematic experience that is distinct to film as a narrative. Sound effects, whether played from percussion instruments or on a Wurlitzer organ, were also often used to match whatever is playing onscreen in order to mimic more of a realistic soundtrack. Although movie-going audiences brought about great business for silent films, the general public would soon be hearing a world beyond the screen that closely resembled their own.

Before sound was conventionally incorporated into film, experiments were consistently made and perfected in the years leading up to its formal introduction. As a forefront figure and inventor of various cinematic technologies, even some of Thomas Edison’s designs have featured a phonograph playing along in synchronization to moving images (Hanson 8). The dream of capturing sound on film has always been sought after, though it took a very long time to achieve it. However, when Hertz’s photocell and Lee De Forest’s Audion tube were invented in 1887 and 1907 respectively, “film sound became a real possibility for large auditoria” (Hanson 8). Furthermore, De Forest presented another leading invention that would accelerate the progression of achieving sound-on-film, in which his device would be used as “‘a method of recording voices, accurately synchronized on film, that eventually may be broadcast’” (Crafton 64). This was in 1920. It took another four or five years before Western Electric came up with their “sound-on-disc and sound-on-film recording and playback systems,” and tried rounding up any interest from the film studios, but to no avail (Crafton 70). That is, until Warner Brothers decided to take the risk. Feeling like there was nothing to lose (as business had not been doing so well for them at the time), they signed with Western Electric and facilitated the process of producing a sound picture with the Vitaphone system, as it was now called (Hanson 8-9). The result was Don Juan, released in 1926 and starring John Barrymore. Although no trace of dialogue had been featured (until the following year when The Jazz Singer came out), it was a big step towards producing a film with both recorded and synchronized sound. 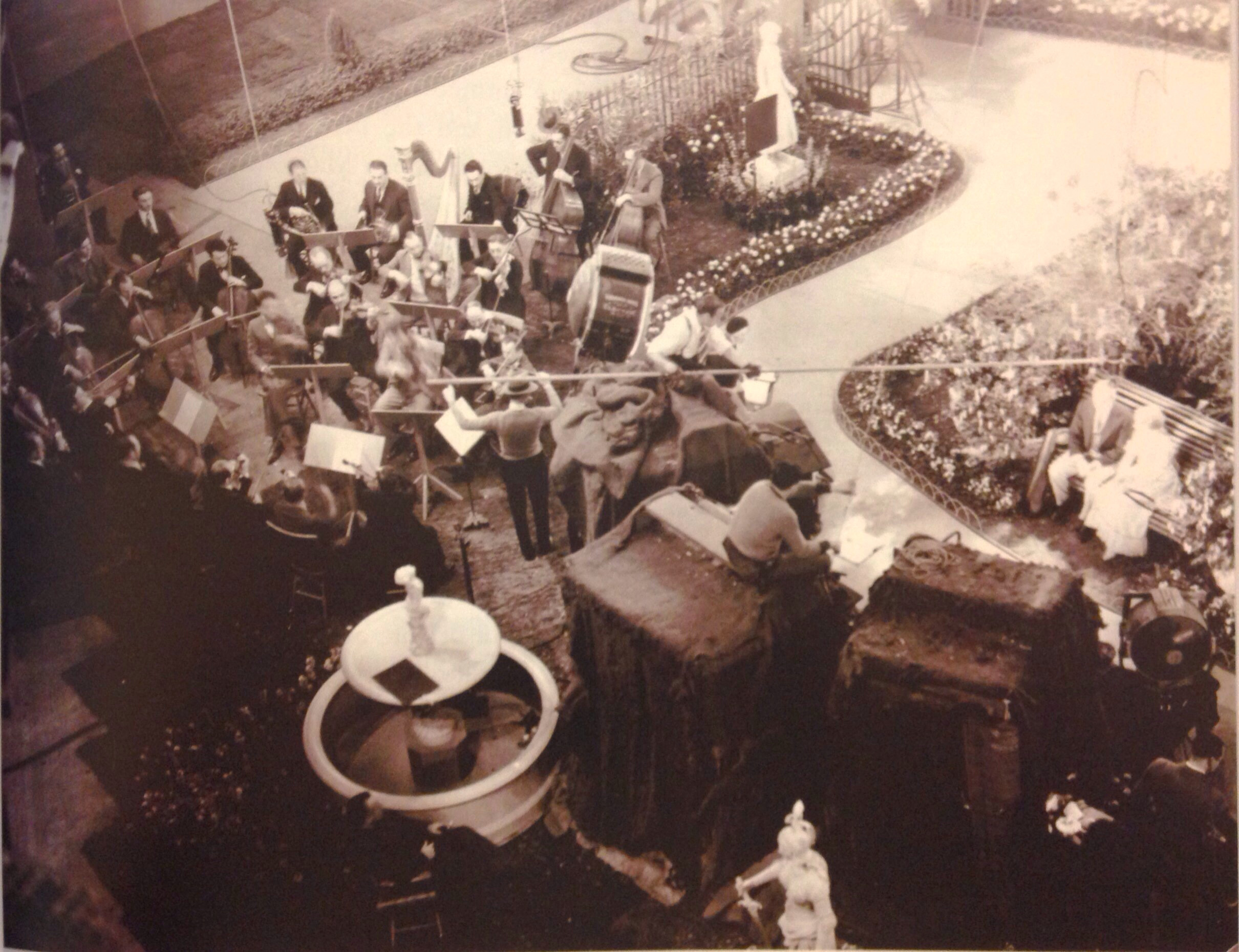 Once sound technologies became a little more sophisticated, there was still doubt of any success surrounding the new trend of talking pictures. This began to change when Hollywood studios started focusing their energies on sound films, and production settings changed drastically. While the switch happened very quickly, there were still some difficulties regarding the “interchangeability of equipment and union demands” (Gomery 87). If anyone is familiar with the 1952 film Singin’ in the Rain, they know of the struggles that were faced by the production crew and actors within the transition from silent to sound films. Along with microphone placement issues, filming had to be absolutely quiet. The need for vocal coaches became apparent. Gone were the days where music was played in front of a rolling camera in order to set the mood for a scene, and where filming completely out-of-doors was common. Everything was now filmed inside production stage warehouses with hand-built sets and artificial lightning. Awkward synchronization troubles plagued members of the crew, and most of the films created at this time did not have audibly smooth transitions. It was still very harsh and abrupt to the ear. During the adjustment, some films even had a complete lack of music running throughout the story. It wasn’t until sound issues were smoothed out and the method perfected that music became part of the narrative again. Although talkies rapidly started to appear in big cities, there were still many small towns screening silent films “while they waited for their local theaters to be wired,” disproving the general assumption that the transition happened overnight (Crafton 253). Movie theaters and palaces were built to show silent films in mind, thus the later addition of a sound system to accommodate talking pictures led to some issues. Theaters could choose between Vitaphone or the newer Movietone sound-on-film systems, although “they both relied on amplifiers and speaker horns to deliver the sound to the theatre” (Hanson 9). Bell Telephone Laboratories became known in the sound film industry with their constant improvements on making efficient loudspeakers that “gave good fidelity with low distortion” due to their conical shape (Aldred). At the beginning of the 1930s, more improvements were made as technicalities revolving the production of sound films continued to be refined. As a result, “equilisation was introduced into the theatre amplifier to compensate” the high and low frequencies that were currently lacking (Aldred). Despite the longer process of wiring theaters across the United States, sound films were exhibited almost everywhere by the very end of the 1920s. To account for the large turnout, many theaters were situated nearby and “were within driving distance for most middle-class people” (Crafton 254).

Now that the United States was becoming a very mobile population than ever before due to the steady rise of automobiles, audiences were able to attend more and more screenings. During the shift to sound, audiences were also becoming diverse. As a result, more content was needed to reflect individual and national tastes (Crafton 254). Sound films “were welcomed by large exhibitors” as well as their customers, as there was a general acceptance that led to a high demand for sound films from the masses (Crafton 255). However, there was also some resistance towards talkies coming from smaller theater owners, mainly due to certain inconveniences like high installation costs (Crafton 256). Along with the arrival of sound, systems such as block booking and blind bidding came into effect, and were often deemed unfavorable by theater owners, especially in the sense that theaters would not be making as much money by being forced to show other features that the audience did not care to see.

The transition to sound also meant a loss among deaf audiences members—something that is not usually thought of in terms of audience reception at this moment in time. Silent films were known for bringing in audiences of different ethnicities, as well as social and economic classes, into theaters together to watch a film that could equally be understood by all. They were “more than an accomplished art; as Lillian Gish often insisted, they were a universal language” (Eyman). Silent films offered public entertainment to all and, “for a brief time, people who were deaf could fully participate in this popular cultural form” (Kovalik 101). When sound films started to replace silent films as the norm in the film industry, deaf audiences no longer held an equal level with hearing audiences. There was no means of including deaf audience members into the talkie shift, as closed captioning would not exist for another few decades. However, even with closed captioning, subtitles, or other forms of interpretation, the moviegoing experience would never reach the same level that silent films provided for deaf audiences within their brief run in film history. Since many minorities attended silent film screenings, keep in mind that it wasn’t the intertitles that aided deaf or hearing movie-goers alike, it was the body language and facial expressions that were effectively used in order to tell a story. This is what sparked universal communication. The shift even affected the fate of some of Hollywood’s highly-regarded silent film actors. With Charlie Chaplin marching to the beat of his own drum and still continuing to make silent films well into the 1930s, he still found success and managed to escape a much worse fate. Fellow silent comedian Buster Keaton showed no fear towards the transition to sound with his fine baritone voice, and even embraced the change. However, when Keaton signed with Metro-Goldwyn-Mayer by the end of the 1920s, he called it “the worst mistake of [his] career” (Keaton, 201). Throughout the 1930s, he unfortunately lost all creative control to the studio; the talking pictures he appeared in never amounted to the same level of quality as his own independent silent work.

To provide a contrasting image, Greta Garbo (who made three silent pictures) had her talkie debut delayed by MGM, since she was regarded to be their biggest star and there was uncertainty revolving around how the public would react upon hearing her voice (Fullerton 24). When the time came, the studio figured they could use her accent as an “asset,” and Garbo was eventually casted in many speaking roles throughout the 1930s, ultimately finding great success within the talkie world (Fullterton 24).

The inevitable merging of sound and film definitely created a long-lasting impact on the film industry. Despite having a rocky start with production- and exhibition-related issues, it was clear that talkies quickly took the nation by storm and the masses demanded more. Audiences accepted the transition, and films continued to be made mainly with sound since then.