Lon Chaney and I have something in common: we are both hearing children of deaf parents. In the Deaf community, we are simply referred to as CODAs, an acronym for “Children of Deaf Adults.” As a prominent actor of the Silent Era, Chaney’s upbringing is something that has somewhat-recently come to my attention and is one that keeps tugging at me for more acknowledgment. As a result, I was compelled to look more into how that might have influenced his renowned career of the silver screen.

It was within the last couple of years that I became profoundly interested in studying silent cinema, as well as analyzing my personal experiences as a CODA. So, naturally, I got to wondering: were there any instances when those two worlds collided? Upon looking through a Wikipedia list of “Famous CODAs,” Lon Chaney was my answer.

Ever since then, I had been meaning to watch a film of his, just to see what his presence was like before the camera. I found out that Laugh, Clown, Laugh (1928) was airing on TCM (that was nearly a year ago now), and I don’t really know how to explain it, but I felt as if I could just tell he had some subtleties unique to someone who grew up with deaf parents. Okay, yes, I saw one movie, but let me tell you about a moment I experienced in my freshman year of college: it was the first day of my English class, and I was put into a group that I’d be working with all throughout the semester. I couldn’t put my finger on it just then, but there was something so unexplainably familiar about this one person. I guess we all just went around sharing “one cool fact” about ourselves, and he eventually mentioned having deaf parents. Maybe it was coincidence, but I swear I have some kind of a sixth sense for that.

Even after years of mulling out realizations and explanations to better understand the two worlds I’m bridged between, I still find it a touch tricky to articulate my thoughts in a way that can be understood by all. While I was watching the film, it was as if I were watching someone express themselves in a universal kind of sign language, rather than merely acting before a screen. There are certain intricacies I’ve picked up with an array of silent film actors (not just Chaney) who seem to go beyond pantomiming, somehow giving the illusion that they’re not just hearing people who have been stripped of sound when put onscreen. The best example I can come up with right now is seeing someone move their lips a lot in a silent film. Although you don’t hear their voice, the subtlety of the behavior is strictly that of a hearing person. Then there are those who bridge that gap and seamlessly combine these realms with just one simple movement or gesture.

It was on April Fool’s Day of 1883 when Leonidas Frank Chaney was born in Colorado Springs, Colorado. His maternal grandfather was Jonathan R. Kennedy, who founded the Colorado Institute for the Education of Mutes in 1874. The school still runs today, only it is currently known as the Colorado School for the Deaf and Blind. Kennedy’s children were three of the first seven deaf students in the school, and it was there that Chaney’s mother (Emma) met her soon-to-be husband, Frank H. Chaney. Emma Kennedy was born deaf, which actually led her parents to establishing deaf educational institutions in Kansas and Colorado. Frank Chaney, however, was born hearing, but contracted an illness around the age of two that led him to becoming deaf. Several sources say he became a professional barber, while Emma apparently taught at the institute.

When young Lon dropped out of school to help his bedridden mother for several years (as she was diagnosed with inflammatory rheumatism), it is speculated that he learned a lot of “pantomime” during that time. Now, several sources use this particular word choice, so it makes me wonder if Chaney ever learned formal sign language (especially before his mother fell ill) or if I’m just overthinking things with a more contemporary lens. I mean, it’s very likely due to his parents receiving an education at a school for the deaf—unless they went through oralism, which was a very common method that taught deaf people to communicate verbally instead of using sign language. In my research, I did come across an excerpt from Michael Blake’s biography—Lon Chaney: The Man Behind the Thousand Faces—which states that, during the early 1920s, Chaney visited the school that his parents attended, and apparently conversed with the students in sign language. Formal or not, pantomime holds a very basic foundation for sign language, in which hand gestures and facial expressions are key to communicating nonverbally. Without a doubt, this would become very natural for him onscreen in his silent film career. An issue of Movie Weekly, an early 1920s cinema fan magazine, quotes Chaney:

“My father and mother,” [Chaney] explained quietly, “were deaf-mutes. In this way, gesture—the movement of the hands—was always a thing of great significance to me. In the early days of pictures, I used to go and watch them and see a world of unrealized possibilities just in the field of gesture alone. All this time slowly within me was growing the desire to express myself in pantomime—even though at the time I was engaged in directing musical comedies on the West Coast.”

With a very chameleon-like way of approaching his characters, Chaney was able to shift himself into various entities. Upon reading that Chaney used to tell stories to his parents about the townsfolk he knew or would run into, it’s quite a possibility that his technique might have stemmed from this. Chaney’s committed and detailed use of makeup also paints another picture for his moniker of “The Man of a Thousand Faces,” illustrating just how pivotal The Visual is in both sign language and silent cinema. 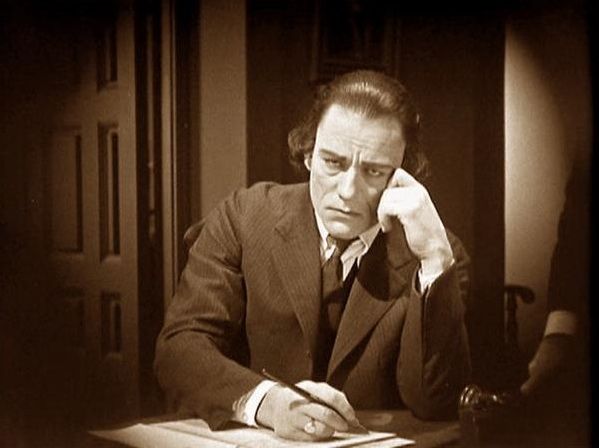 It didn’t take me very long to realize just how much of a private person Chaney was, making it especially difficult to research his upbringing. I can only make educated guesses based on what I know about Deaf history, and connecting them with my own experiences. However, another excerpt from Blake’s biography mentions that, at Chaney’s funeral in August 1930, many deaf people within Los Angeles came to mourn him, which I found to be interesting. It would seem that he kept close ties with the Deaf community throughout his life, and if that were true, it would be a most refreshing thing to know during that shadowy time.

Lastly, I was surprised to discover that James Cagney portrayed Lon Chaney in a 1957 biopic, aptly titled Man of a Thousand Faces. Earlier this year, I was on the hunt for any older movies that feature a deaf actor, character, or any use of sign language in them (and I did find something), but somehow, I hadn’t known about this particular movie until now. According to TCM’s synopsis of the film, Chaney’s status as a CODA was mocked by children in his youth, along with his first wife, who was apparently disgusted to find out that his parents were deaf. She then began to fear she was carrying a deaf child. Sadly, whether or not this was true in Chaney’s life (I know that biopics can be fictionalized at times, as this one apparently was), this sort of behavior was typical during a time of great intolerance and misunderstanding towards the Deaf community, and realistically, hints of it are still found today. I must say, though, I’m actually kinda curious to see this film (once I find it) and how they portrayed some aspects of it. In short, I have a funny feeling my research won’t stop here, and frankly, I don’t want it to.

This is my contribution to the Classic Movie History Project Blogathon, hosted by Movies Silently, Once Upon A Screen, and Silver Screenings. Click here to see a daily recap of posts.