For a while, I have been under the bewitching allure of Buster Keaton and his films, and it is one spell that I feel cannot truly be broken. I have since immersed myself into every film, book, and photo I could find relating to Buster, and through it all, I’ve surprisingly learned a few things about myself. For starters, the unruly path that I faced while trying to sway among various creative fields of study weighed heavily on me for a few years, until a light started filtering through the dense overgrowth that is my mind. The things I wanted to study became clear to me because of him, and I realized that I didn’t have to give up my passions in favor of another. Rather, they formed a perfect amalgamation. Most of all, who knew that the small plucky man in the porkpie hat could be the one to help me further understand what I consider to be the deepest complexity of my life?

It didn’t take me very long to try and articulate these sentiments into writing. Last year, just mere weeks after I watched my first Buster Keaton film, I wrote a personal essay for my creative writing class entitled “The Reel-Life Silent Film Actress,” which fleshed out my newfound fascination of merging silent film with sign language in the form of an alter ego. Seeing as my life is divided into (yet simultaneously united with) both sound and silence, it felt very natural for me to build upon this idea.

For those who don’t know, I am a child of deaf parents—CODAs, we’re known as. For the duration of my life, I would constantly switch back and forth from signing and verbally speaking, to sometimes having these two realms meet somewhere in between—depending on who I’m with. It is through Buster that I discovered the familiarity of my world within the world of silent cinema. There are multiple things happening at once in almost any given silent film: at the time of filming, there is a world of sound occurring, which is simultaneously obscured by silence. We, the audience, do not have access to that sound, yet we know its presence is still there. To add another viewpoint, has anyone ever noticed that, although it is likely that the characters hear the sounds that you don’t, sometimes they’re put on an equal level with you—relying solely on sight? For example, you see something that is clamoring up behind the main character (i.e. a honking car, or a person trying to yell and get their attention—something that you know is associated with noise), and yet the character doesn’t even notice—doesn’t even hear it. To me, it’s little subtleties like these that play with and provide a deeper element to the in-between nature of silent film.

Even in the early talkies, there are still instances of silence that are overwhelmingly present throughout a film. While I was taking the free online course TCM Presents Painfully Funny: Exploring Slapstick in the Movies, I came across a quote that spoke volumes to me:

“Films between 1928 and 1935 sometimes can feel trapped between the silent and the new sound era, one foot seemingly planted in each tradition.” (Slapstick Speaks, 3.1)

This essentially describes my life.

Recently, another creative writing professor of mine had talked about interstices in fiction. That was the word I needed: interstitial. Interstices are a realm of their own, occupying the space between two things. It is an in-betweenness. Not fully sound, not fully silent. Not fully Hearing, not fully Deaf. To add, my professor made the connection that interstitial space is similar to that of celluloid frames, which, needless to say, is perfect for this case. 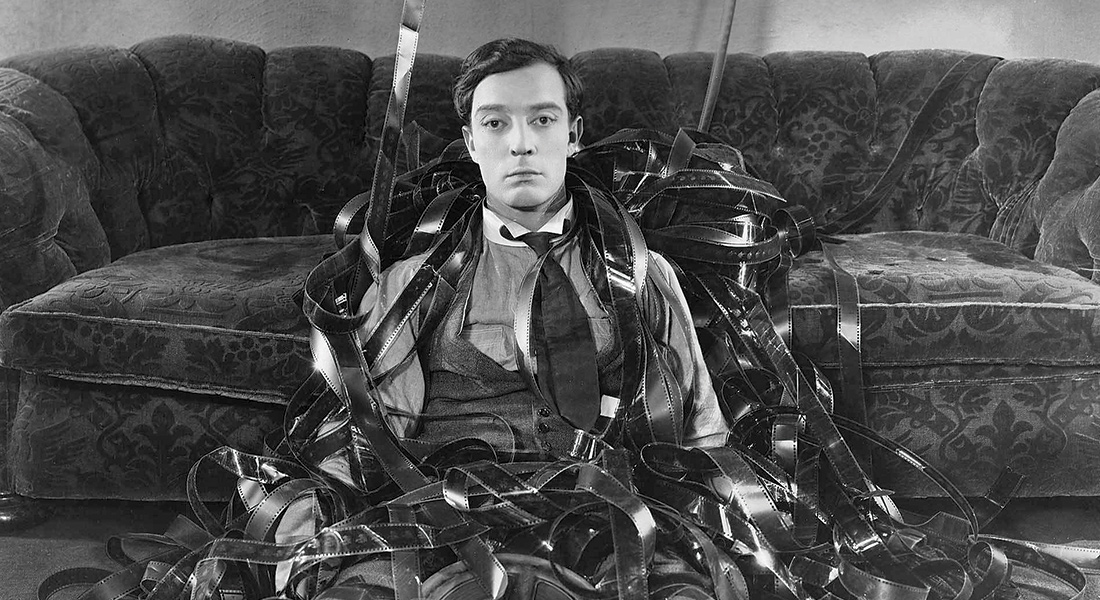 In my aforementioned essay, I wrote out some of the usual experiences I faced while growing up with deaf parents, easily pairing them with silent film motifs. Here are a few highlights:

“Stepping into a retail store, I wandered off to look at something that caught my eye. Moments later, I distractedly turned my head to look at the salesclerk who approached my mother, a cheery ‘How may I help you today?’ escaped from her smile. Often, my mother would return the same friendly smile, but today she happened to look in the other direction and strolled off. A mixture of confusion and slight vexation washed over the woman’s face, her eyebrows politely furrowed. With an inward sigh, I reached for my mother’s arm out of habit, and explained to the clerk, ‘My mother’s deaf.’ I offered a small smile, her expression softened in surprise as she nodded. My mom was unfazed, as this happened nearly every time. However, thoughts continued to penetrate my head as to why I am never able to handle these embarrassing situations with ease. I empathized with the quintessential silent film damsel-in-distress, but it was only up to me to save myself.”

“As a child, my fingers formed words and expressions comfortably, unaware that they brought about so much attention to the curious and passing eye. My signs were as eloquent as they could be at that age. I was living seamlessly between two worlds.”

“Storytelling was routine around the dinner table. I never shied away from using over-the-top facial expressions and expressive arm movements that could nearly knock a person over. Home was different, but my signing morphed in the public eye by the time I reached my pre-teenage years. Every time I left the house with my parents, a new audience would materialize and set their eyes on each sign that my parents and I relayed to one another.”

“There was another instance at a wholesale store, where I was signing to my mother in pleasant conversation as we were waiting in line. From the corner of my eye, a lady and her young daughter were looking directly at us. Staring, and staring, and staring. My hands self-consciously lowered and made quick, unintelligible motions—almost whisper-like. I revisited my silent film actress persona: the one with rouged cheeks. Only, my cheeks weren’t colored a deep pink with makeup, but rather, with heated annoyance and frustration.”

“Years passed, and my signing became much more choppy and reserved in the outside world. Secretive, perhaps. I responded with a shake or nod of my head, the raise of my brow, a silently mouthed word, an exaggerated expression… I had grown much too conscious of the fourth wall.”

I find it purely serendipitous that my first Keaton film happened to be Sherlock, Jr. (1924), as it also plays with the idea of interstitial space—which I touch upon in the last passage of my essay:

“The final scene of the film faded to black. I blinked my eyes a couple of times, replaying the slapstick segments in my head as I transitioned back into the real world. At one point in the film, Buster Keaton’s character—a projectionist—falls into slumber and steps into the moving picture he was just watching. A simple dream ensues. He awakens back into reality, seeing his life with a much more conscious lens. The reconciliation that he models his life after the film is also paired with the notion of just how much films can imitate and influence lives.”

And with that, I thank you, Buster.

This is my contribution to the Things I Learned from the Movies Blogathon, hosted by Speakeasy and Silver Screenings. Click the link to see a daily recap of posts.

12 thoughts on “What Buster Keaton Taught Me”