Recently, I returned to the San Gabriel Mission Playhouse for another “Silent Sundays” matinee, anticipating to see three silent comedians on the big screen in succession: Charley Chase in Crazy Like a Fox (1926), Buster Keaton in The Scarecrow (1920), and Harold Lloyd in Bumping Into Broadway (1919)—all of which would be accompanied by Jerry Nagano on the theater’s 1924 Mighty Wurlitzer pipe organ.

The event was held on a (very rare) rainy day, providing a cozy opportunity to bundle up and take shelter inside a beautiful and historic theater. Once I bought my ticket, I skittered around to the main entrance, and settled on a seat near the back. I still had about twenty minutes to spare, so I made the most of it by observing my surroundings. I got a much better look at the theater’s interior from my vantage point, and truly felt like I had stepped back in time for a split second.

The playhouse director took the stage for a moment, and talked about how the series is a community engagement put on by the theater in order to keep the spirit of silent film alive by presenting them to today’s audiences. She introduced our organist for the event, who began by playing select era-appropriate tunes for the next half-hour. During this time, I was happy to see my friend finally arrive after being stuck in traffic, making it just in time for the first film to start screening.

I wasn’t too familiar with Charley Chase until I took TCM’s Slapstick course back in September, so I was glad to have learned more about him prior to this screening. Although the plot for Crazy Like a Fox is a little predictable, Chase added his own touch to it and got a huge giggle out of us. My favorite parts in this two-reeler include the scene shown below (where he places an alarm clock next to his sleeping foot), and his silly feathery hat antics.

Intermission followed shortly thereafter, and my friend and I spent the next fifteen minutes happily chatting about all things film. The lights started to dim again, and it turns out that Buster Keaton’s film was playing next. The Scarecrow is the first short film of his I’ve seen, and it’s naturally become a top favorite of mine since then. I clearly remember being enchanted by the contraptions in the shared one-room house, so much so that I knew there was no turning back from that point. Of course, Buster is adorable in it (especially when he’s nursing a toothache, and later when he’s dressed as a scarecrow), Sybil Seely is a breath of fresh air, and Luke is a canine wonder to behold. 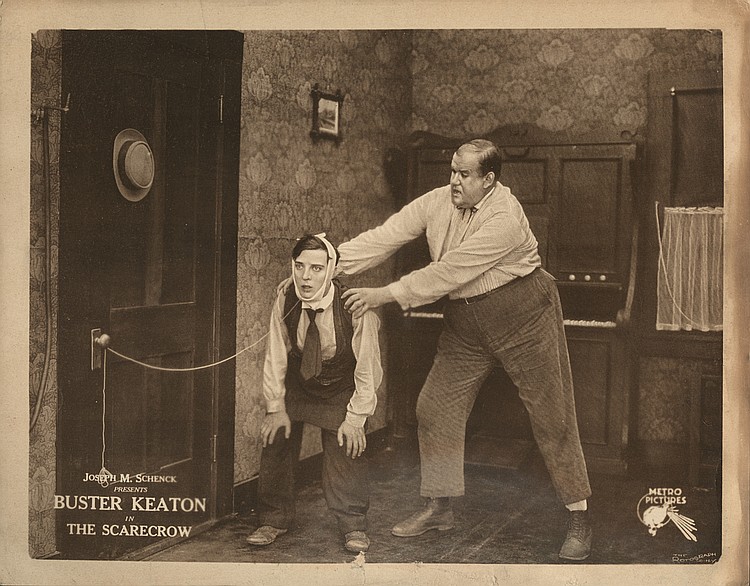 The third and final film is rarely screened, as it is one of Harold Lloyd’s earliest two-reelers. Bumping Into Broadway debuts his well-known “Glass Character,” and has him playing opposite his leading lady at the time, Bebe Daniels. It’s fresh-faced and fast-paced, and features one of my favorite bits where Harold disguises himself as a coat hanging on a rack (pre-Safety Last!).

Amidst all the hustle and bustle of school assignments and life in general, it’s always nice to get the chance to escape from the real world for a couple of hours and watch some enjoyable films. And with less than two weeks to go till the semester’s end, I should be a little more present within this space. So far, I have another post planned out, plus two exciting announcements that I can’t wait to share with you, so stay tuned for those!

One thought on “Silent Sundays”