This post is long overdue, but I wanted to share some highlights from my six-month stint as a moving image archive intern. It’s been nearly a year since I first started archiving, and I still can’t believe my luck in finding (much less landing) such a convenient position. I was fortunate enough to work in a library that boasts an impressive collection of Paramount and Pathé newsreels from the first half of the 20th century, with topics ranging from everything under the sun. As an undergraduate at the time, working hands-on with nitrate and acetate film is something I wouldn’t have expected to be doing unless I enrolled in a graduate program. Another bonus: I didn’t even have to commute that far.

I worked two days a week at two separate locations: the main office, which is where I learned how to catalog; and the vaults, where I worked on getting the film prepped for digitization. It was information overload on my first day, but I quickly caught on to the workflow. I learned how to set everything up on the workbench, and was taught the essentials of handling and preserving film. As the weeks went by, I became more familiar with identifying nitrate and acetate film, as well as the newer polyester film base. I mainly worked with negative camera footage, but came across some positive rolls once in a while.

My friendly greeter at the vaults.

Prior to starting this internship, I had known of the issues surrounding nitrate and acetate film in terms of their decomposing nature, and how important it is for archivists to preserve audiovisual material by digitizing them. Since so much material is out there, it can take a very long time to digitize an entire collection. This is something I have observed throughout my internship. I have mainly been helping assemble reels from the library’s Pathé collection. Each tin can may contain multiple rolls of film, so pulling out film cans; inspecting the film for any odors, broken sprocket holes, soundtracks to note (or lack of), and loose splices; doing minor restoration work when needed; assembling and prepping the rolls into 1000 ft reels; running them through a scanner; locating their index cards; and recording their information into the database (among many other tasks) requires quite a bit of time and effort.

Admiring the classic cars parked outside of the vaults during snack breaks.

Eventually, I was allowed to start taking upon little projects of my own. For instance, I’d been itching to see if the library had any material on Buster Keaton (you knew this was coming). I typed his name into the library’s database and, to my delight, a few results popped up. I read through the descriptions that seemed the most promising and wrote the roll numbers onto a piece of paper, differentiating them between Pathé and Paramount. I went into the respective vaults, looking for tin cans that might contain these numbers. Unfortunately, I didn’t have very much luck in finding all of them, but was pleased to find two in seemingly healthy condition. After inspecting both rolls, they turned out to be the ones I was most looking forward to working with. The Pathé roll (a nitrate copy of a sound negative) apparently featured Buster Keaton at a charity baseball game in the early 1930s, though I could not spot him within the tiny 35mm frames. The Paramount roll featured Keaton with Jack Pearl in 1934, which I had previously known about by stumbling upon a clip of it online. Now, I was holding the original negative in my hands, and the feeling of it is nothing short of indescribable. Once the rolls had been prepared and sent to the office for scanning (which took less than a week), the still frames I had inspected came to life in full motion. Needless to say, it became one of my most treasured moments. 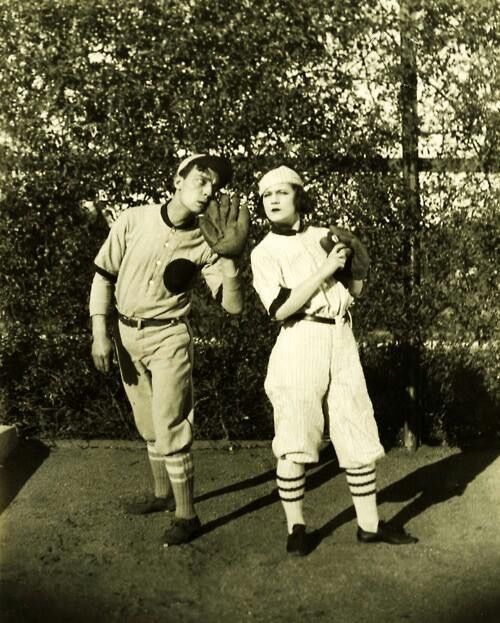 Since I’m not allowed to share any kind of image from the collection, have a baseball-themed photo of Buster being all cute and matchy-matchy with actress Viola Dana.

Later on, I pitched one of my personal research projects to my supervisor, which centers around the intersection of deaf history and film history. I’d already collected some information relating to the Old Hollywood era, especially regarding famed silent film actor Lon Chaney as a child of deaf adults; Granville Redmond, a deaf impressionist painter, who befriended Charlie Chaplin and was even offered to play bit parts in some of his earlier films; and any movies I could find that contained characters from the Deaf community. So, that led me into wondering whether there might be some newsreels featuring deaf people. It was a shot in the dark, but to my surprise, I found a few results on Helen Keller, along with early footage of deaf people and sign language. One newsreel even dates back to the 1930s!

I’ve already learned so much about archiving within these six months as an intern. Not only have I been able to handle nitrate and acetate film, I’ve also aided a humble part in helping preserve and digitize an incredible collection, gained a skill in cataloging, and became aware of valuable resources to guide me as I take the next step in my career. I am super grateful to have found a job at another archive through my internship, and currently work as a full-time audiovisual archivist and inventory assistant. My goal right now is to get my MLIS degree, which I aim to start on next year!